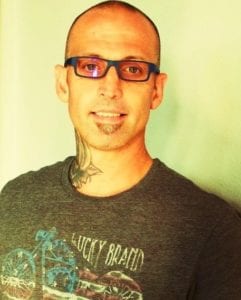 “I Had no Hope Whatsoever”

“I couldn’t imagine any of this stuff ever happening to me…ever…and if you asked me to paint a picture of what I want my life to be…and it didn’t matter how fictional it was…I would never be able to paint this because it’s far greater than anything I could ever imagine.”

Daniel found alcohol at a young age. The first time he drank, he was in sixth grade. He took beer out of his parents’ refrigerator on Halloween night. By the time he was in high school, he was drinking every weekend. It was a stressful time for him — his parents had separated, and he got into trouble for vandalizing. “I really think a lot of stuff built up when I was young, and the juvenile thing really scared me…I was in and out of courts for two years. Drinking gave me a sense of relief from everything that was happening in my life at the time and I was always trying to fit in and getting people to like me.”

As a teen, Daniel always had a part-time job–it was part of his upbringing. He also played sports including baseball, football, BMX bike racing and lettering in varsity golf through his junior year in high school. But drinking had become increasingly more important and he started giving up activities he once enjoyed if they didn’t involve alcohol. By the age of 19, he’d crashed two cars while under the influence, saying, “I’m so fortunate I never injured anyone.”

Daniel was 22 years old when he started using cocaine and shortly after that, crack, which he says destroyed everything.  “No one wanted me in the house…I started stealing…a twenty here and a twenty there. “That’s not me”, he explains. “I never did anything like that before. I started selling everything to buy more (drugs) and I began destroying everything, every relationship.”

He then took one of his parent’s cars and never came back. “My mother and stepfather had no choice but to call the cops” he adds. “My mom showed up to court and begged me to get into a drug program.”

His run-ins with the law continued and — even though they were always drug related — the court system didn’t acknowledge his addiction, only the criminal behavior. His mother continued fighting to get him into drug and alcohol programs, and he says he wouldn’t be here today if it was not for her never giving up on him. He was in countless programs, but his addiction kept winning and his legal problems kept mounting.

Daniel is still trying to come to terms with the pain he caused his family and friends. Two of his biggest regrets are stealing jewelry out of his mother’s closet – the jewelry his grandmother left her — and taking a car from the dealership where his father worked for 40 years.

“My mother couldn’t believe that I would do this to my own family. I wish I knew back then that taking one drink, or trying coke or crack, would hurt so many people and rob me of so many things. I think about the sleepless nights my mother had and her being relieved when I was in jail because at least she knew where I was. I missed out on so many things like the time my father was in the hospital and almost passed away.”

“In prison, there wasn’t a support group to teach me about my disease of addiction or any opportunities to learn about myself. So as soon as I was paroled, I hit the streets and started shooting meth every day. No one saw me for 2 ½ years. I was a loner. No one said hi to me and I didn’t say hi to anyone either. Now when I see people on the Venice boardwalk walking around talking to themselves, I realize I wasn’t any different from them. I heard voices all day long. I used to hear my mother crying. I used to believe that my father wasn’t alive anymore and that my brother passed away.  I thought they (the voices) aren’t going to fade away and this is how I’d be for the rest of my life. I’m so grateful I didn’t have the courage to hang myself because at my lowest points, I probably would have tried to get rid of myself.”

The last time Daniel was arrested for petty theft, his public defender said he could get his sentence reduced to four years and they wouldn’t have to go to trial but Daniel pleaded for one last chance to get into another program because he knew if he went back to prison, he would never make it out. The public defender reluctantly agreed and got him into the Phoenix House Venice Beach residential program.

When Daniel arrived at Phoenix House, he realized all he wanted to do was be back on the streets. After a few days, something changed. “This is where it gets clear for me, everything in the past is such a blur.” He saw that people at Phoenix House cared. He followed directions, stopped keeping secrets, started building relationships – including helping others who entered the program from the county jail – and life started to open-up for him. He started to find himself and take responsibility. “They helped me get a job at the sidewalk café and I started learning to be the person my parents raised me to be.”

“It’s like I’m a completely different person…and I never thought that would happen for me in my life. I had no hope whatsoever.”

After a couple of months in treatment, Daniel’s parents came to visit. “They haven’t been together since 1991 and here’s my father walking down the boardwalk in a walker and his hair is all white and my mom is older now. I haven’t seen them for so many years and they’re coming to see me after everything I’ve put them through! That gave me even more hope,” he says.

Daniel realized the purpose of his journey was to give back. He decided to work for Phoenix House and is now studying to become a Certified Alcohol and Drug Counselor at UCLA. He’s taking two classes this summer and has a 4.0 GPA.

“At Phoenix House, the staff put in endless hours to help people like me get their lives back and I want to do the same for others”, he explains. “There isn’t a day that I don’t come home from work and think about how I can present something differently tomorrow to help make a difference in someone else’s life. Every day I work at being the best I can be and there are days when I’m not perfect, but I continue to grow.  I stay in contact with my support groups and close friends that are also in recovery. I never turn down an opportunity to give back.”

Daniel also found love. “My wife and I met in a Santa Monica coffee shop where she worked.  She told him the coffee was on her that day. “It’s the best cup of coffee I’ve ever had”, he says. “We got married at lifeguard tower 20 next to the Santa Monica Pier where we had our first kiss. Our wedding rings are engraved on the inside, mine reads See you at tower 20 and hers reads I’ll be there.”

“I keep a list of goals in my wallet. I stay grateful and I’m (even) grateful for the days that are tougher than others. And I’m grateful for the people I get to work with. This is home to me. I know exactly what I want to do and I’m doing it. I really believe I was watched over all these years so I could give back.  I get to be a son again. I get to be a husband today. I get to correct the things I did.”

Daniel will celebrate three years of sobriety on October 16, 2020.